What to see in Liguria

Liguria is a land to visit, full of historic sites, cultural and natural. From the famous resort of sea around the world, such as Portofino, Camogli, Alassio and Sanremo to the imposing capital rich in museums, monuments and history, with a large port: Genoa.

The Hotel Doria is located in a prime location: right in the center of the arc of Liguria Varazze Varazze can easily visit both the Ponente of Riviera (Albisola, Celle Ligure Savona, Alassio, Sanremo etc.) and the Levante of Riviera (Genoa , Camogli, Santa Margherita, Portofino, Cinque Terre etc.) 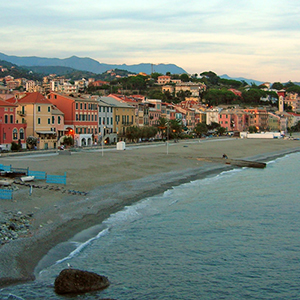 A look at Celle Ligure

The Ponente of Ligurian Riviera stretches from the west of Genoa to the border with France, offering its inhabitants and its visitors a great variety of sea and landscape.
Compared to the Levante Riviera, it offers more wide and sandy beaches.
Among his most famous places of western Liguria remember first Sanremo (for the famous Italian Song Festival and the Casino) and Savona for its cruise port.
But the western Liguria is not only sea. The hinterland offers forests, parks, and even a bit of mountain: appeal, and therefore also to the lovers of hiking, trekking and mountain biking.
For gourmets, Liguria is synonymous with good cuisine: from the ancient traditional regional dishes to fresh fish, going for focaccia, panissa, bianchetti, pansotti with walnut sauce, you can pamper yourself with many culinary specialties and lose yourself among caruggi (alleys) of the many seaside resorts that are worth visiting, such as Celle, Albisola Alassio, Imperia, Bordighera.

Savona Savona is the third most populous city in Liguria. It has an important port of call (today especially for the ports of Costa Cruises ships) and, behind it, a long history is still visible in its beautiful medieval historical center. If you're planning a visit to one or more days, see our page on Savona: what to see, what to do and things to eat.

Savona can be reached conveniently from Hotel Doria in about twenty minutes by car and public transport.

With its long sandy beach, Varazze is a popular summer destination and appreciated.
But it's not just this. Many tourists also choose for trips to Beigua Park and the water sports, especially windsurfing. To discover more, please visit the section of our website dedicated to Varazze: the sea, the nature and what to see.

In the historical center of Varazze, within walking distance from the station, there are our hotel and our restaurant.

The Levante of Riviera

The Eastern Ligurian Riviera stretches from the eastern districts of Genoa to the border with Tuscany. Its coastline, compared to that of the west, is more rugged and full of small bays.

For those who are wondering what to visit and what to see in this unique area, we can say that there is definitely spoiled for choice. We have towns and villages that the whole world envies us, like Camogli, Santa Margherita, Paraggi e Portofino. A few kilometers further east you can admire the infinite wonders of the Cinque Terre, of Porto Venere and Lerici, ideal places where you can spend days full of romance and beauty.

A territory to be discovered, where the originality of its countries remains intact and blends perfectly with the sea and nature. Really impossible not to fall in love with the Italian Riviera ... as well as in all of Liguria!

CWho passes from Liguria, can not go without visiting Genoa. The Superba, this is his most famous nickname, is an amazing city and a very important port of call in Europe. From here you can catch a boat to Sardinia, Corsica, Spain, Sicily, North Africa, and much more. But before leaving, be sure to visit its hidden corners, its alleyways and its majestic buildings that will remain forever in our hearts.

What to see in Genoa ? The list is really long. unmissable are Rolli, untangled along Via Balbi, Via Garibaldi, Via San Luca and Via Lomellini: Heritage Sites since 2014, this complex of luxurious palaces overlooking some of the most characteristic streets of the historic center. A center which, starting from Piazza De Ferrari, where there is also the Palazzo Ducale, you can run entirely by foot to admire every facet. After admiring the two-tone facade of San Lorenzo Cathedral, we travel the homonymous street until arriving at the Old Port, fully converted area in 1992 by Renzo Piano for the 500th anniversary of the discovery of America.

Today, the Old Port of Genoa hosts many nightclubs, the famous Aquarium, the Biosfera (a steel ball suspended over the water) and the Galata - Museum of Sea, the largest maritime museum in the Mediterranean.

The Old Port is also a convenient place to park the car to take it up at the end of the visit. A lack of Genoa, in fact, is unfortunately the traffic!

We conclude the tourist promenade with a look at the city's symbol, the Lanterna. Continuing from the Old Port to the ferry terminal, in fact, it stands this beautiful lighthouse, a landmark for boaters, which today also hosts exhibitions and events.

Other real gems in the surroundings of Genoa are the seaside village of Boccadasse and the Nervi Park, to spend some time in nature and relaxation.

Genoa is easily accessible from Varazze and Hotel Doria also by train (get off at the stations of Piazza Principe or Brignole). For more tourist information, visit the official portal of the city of Genoa.

What you can not miss in Genoa: 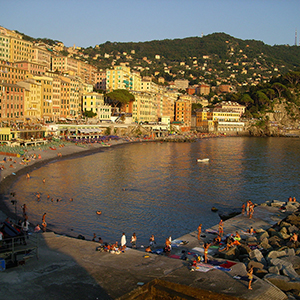 The beach of Camogli

Camogli is a small jewel in which we find culture, tradition, sea and nature.
After a walk in the village and a visit to the Basilica of Santa Maria Assunta, go up for a ride to the Dragonara Castle, before heading down and go by boat to the bay of San Fruttuoso.
Here you will find the Abbey of San Fruttuoso of Capodimonte, just a few steps away from the water.
In the same bay, offshore in 15 meters deep, is the Christ of the Abyss, reached by a dive organized by the low level of difficulty. Also, thanks to the boat, a few minutes from the village you get to Punta Chiappa, where you can dive from the famous rock. Once you know what to see in Camogli, you can think of what to eat. The answer is in the scent of his focaccerie: revenue and... buon appetito!

The Cinque Terre is a rugged stretch of coast in the province of La Spezia which includes 5 wonderful villages: Monterosso, Corniglia, Vernazza, Manarola, Riomaggiore.
The territory is UNESCO Heritage Site since 1997, along with the nearby Porto Venere and the islands of Palmaria, Tino e Tinetto.
The Cinque Terre is an enchanted place, with the sea and the wonderful country, surrounded by a large green where you can go hiking and trekking through the paths that connect the various villages. If you’re traveling as a couple, do not miss the Via dell’Amore (love street), short walkway that connects Riomaggiore and Manarola. For those less inclined to walk, however, there is good news: you can move "from land to land" by train. And, always by train, after a nice visit to the Cinque Terre, you can reach our hotel!! 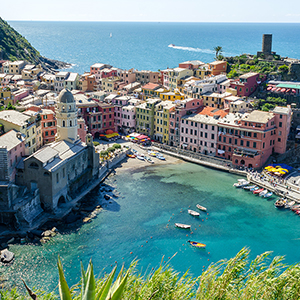 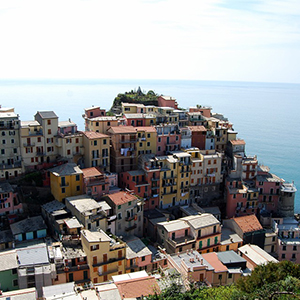